Klayman: Murderous "Friends" of Ilhan Omar and Rashida Tlaib!
Go to www.FreedomWatchUSA.org and Support Our Citizens Grand Juries and Join Our Justice League! 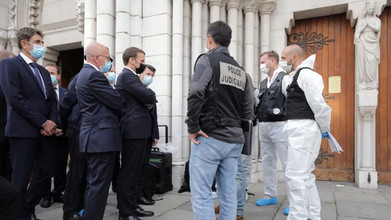 3 dead as woman beheaded in France, gunman killed in separate attempted attack | CBC News
CBC
October 30, 2020
A knife-wielding attacker shouting "Allahu Akbar" beheaded a woman and killed two other people in what French officials described as a terrorist act at a church in the French city of Nice on Thursday while a gunman was shot dead by police in a separate incident.

Within hours of the Nice attack, police killed a man who had threatened passersby with a handgun in Montfavet, 250 kilometres northwest of Nice near the southern French city of Avignon. He was also shouting "Allahu Akbar" (God is greatest), according to radio station Europe 1.

A defiant President Emmanuel Macron, declaring that France had been subject to an Islamist terrorist attack, said he would deploy thousands more soldiers to protect key French sites, such as places of worship and schools.