No, Hillary, More Than a Village, It Will Take 'a Revolution' to Restore the Nation to the Vision and Creation of Our Founding Fathers, Says Larry Klayman! 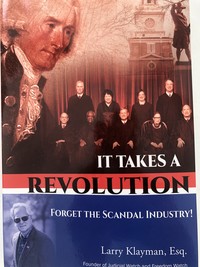 Madden Mischief
October 28, 2020
Larry Klayman's latest book "It Takes a Revolution," pulls no punches just like Larry, founder of Judicial Watch and Freedom Watch, does boldly, but politely in courtrooms across the country, often to the exasperation of legions of federal judges who are perhaps not as uncomfortable or outraged as he is over injustices and corruption he often sees crawling "like cockroaches" throughout our government and legal system.

Larry has probably the most Jeffersonian view of America in terms of his envisioning a dangerous doctrine inherent in federal judges, unelected by the people, acting as the ultimate arbiters of constitutional and other legal questions amid hardening leftist conspiracies, schemes and violence which will require a revolution to put down.