Klayman: Good for Matthew McConaughey!
Go to www.FreedomWatchUSA.org to Join and Support Our Leftist Media Strike Force! Share and Donate 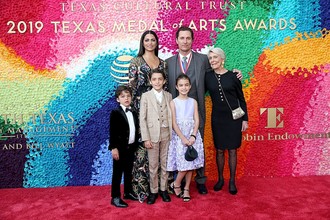 While promoting his book, Greenlights, on Dax Shepard's Armchair Expert podcast, the men discussed similarities in their upbringings — as children of divorce, with not wealthy parents, in households with physical violence — leading the host to ask the Academy Award winner, 50, about raising his kids: Levi, 12, Vida, 10 and Livingston, 7. McConaughey, who married wife Camila in 2012, spoke about guiding his sons as they navigate conflict, and raising all three more means than he had growing up.

McConaughey said a "big question" he has, and one he knows Shepard relates too, is "being in the affluent positions we're in [after] coming from similar backgrounds, where we had different resistance given to us in different ways — from where we lived to what we drive to how we were raised, disciplined, everything else — how do we give our children the right amount of resistance to be autonomous individuals? Because if we're saying 'yes' all the time and going, 'Yeah, just use all this influence. That's who we are. That's how life is,' we're doing them a disservice."