Klayman: CEO Zucker About to Be Fired at CNN Which He Turned Into The "Communist News Network"!
Go to www.FreedomWatchUSA.org to Join and Support Our Leftist Media Strike Force! Share and Donate 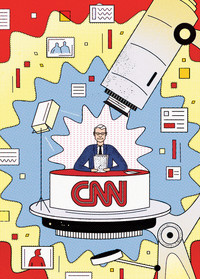 CNN Could Face New Era Without Jeff Zucker
By Brian Steinberg
Variety
October 27, 2020
Jason Kilar sat in a darkened conference room in 2007, telling anyone who came to visit about the wonders of a new video-on-demand service called Hulu. Kilar was the outlet's first CEO, and the room in which he was perched stood in the headquarters of NBCUniversal, one of Hulu's two original co-owners. Another worker in that building was Jeff Zucker, then the CEO of NBCU, and someone who helped spur Kilar's early journey.

Now it is Kilar who may have influence on Zucker's future steps.

After losing the NBCU job once Comcast took control of that company, Zucker has blazed a new path for himself as president of WarnerMedia's CNN. Since taking the reins of the venerable cable-news outlet in 2013, Zucker has given the once-vanilla dispenser of breaking news an entirely new image and mission. Larry King, who held forth at 9 p.m. on CNN for a quarter of a century with genial celebrity interviews, would never fit in the network's modern lineup, where that time slot is reserved for the pugnacious Chris Cuomo, CNN's most-watched personality. CNN has quickly become something that doesn't just report, but holds people accountable. Some might even say it crusades. In seven years, Zucker has become as critical an element of CNN's DNA as Ted Turner, the guy who built the thing in the first place.