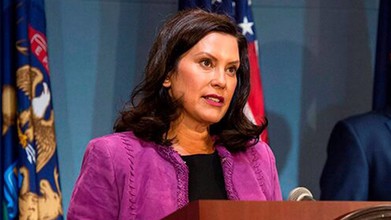 Whitmer thanks FBI, blames Trump admin after kidnapping plot foiled
By Ronn Blitzer
Fox News
October 26, 2020
Michigan Gov. Gretchen Whitmer blamed the Trump administration for rhetoric that she claimed led to a kidnapping plot against her, after the Trump campaign accused her of encouraging attempts on the president's life.

More than a dozen people were arrested earlier this month as state and federal authorities thwarted a militia group's plan.

"First I want to acknowledge the incredible work of the FBI and the Michigan State Police," Whitmer told "Fox News Sunday" host Chris Wallace, "but I also want to acknowledge that rhetoric like this contributes to bringing up the heat. I have asked the White House since April to bring the heat down. That's when the death threats started."