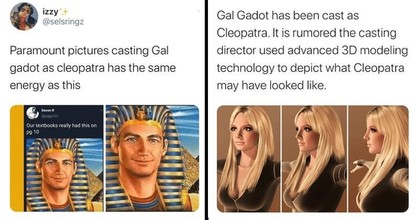 Gal Gadot To Play Cleopatra And Twitter Has Mixed Feelings
Cheezburger
October 12, 2020
Deadline announced earlier today that Wonder Woman's Patty Jenkins and Gal Gadot would be teaming up again to bring a new epic about Cleopatra to life. While the news has been better-received than Gadot's "Imagine" debacle from the early days of quarantine, not everyone's happy about the choice. Gadot's an Israeli with very European heritage, and it seems that many Twitter users feel that casting does a Scarlett Johansson to an Egyptian queen. As some people are crying whitewashing, many have pointed out that by most credible accounts, the fierce ruler was actually of Greek heritage - though her mother's roots have been heavily debated. As with most Hollywood casting controversies, it seems that everyone has a very important opinion on the matter. You can enjoy (or scoff) at some of them below.