Republicans Gripped by Dread as Multiple Crises Swirl
Go to www.FreedomWatchUSA.org to Join and Support Our Leftist Media Strike Force! Share and Donate 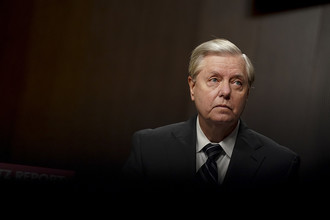 By Ryan Lizza, Daniel Lippman
POLITICO
October 5, 2020
On Sunday evening, Sen. Lindsey Graham, like many Republicans in Washington, was simultaneously monitoring three political crises, all of which were made worse by the spread of coronavirus infections through the upper echelons of the Republican Party.

First, there was the president. His real condition was as much of a mystery to Graham as to everyone else. Graham said he hadn't talked to Trump since Friday after the president's positive Covid-19 test came back — "he was in good spirits" — but that he had just checked in with Jared Kushner earlier in the day to get an update.

Then there was the Supreme Court. The virus has forced six Republican senators — three of whom have tested positive for Covid — into quarantine for at least two weeks. Two of them, Thom Tillis and Mike Lee, are on the Senate Judiciary Committee, which Graham chairs. His plans to push through the nomination of Amy Coney Barrett were now uncertain. Senate Majority Leader Mitch McConnell said over the weekend that "our biggest enemy" in confirming Barrett before the election, and cementing a conservative 6-3 high court majority, is "the coronavirus, keeping everybody healthy and well and in place to do our job."