Klayman: Only the Latest Example of Why the NBA Has Hit an All Time Low! LeBron Is Arrogant and Understands Little! Boycott the NBA! 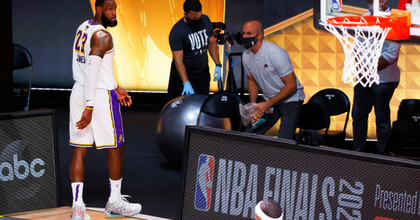 Fans stunned as LeBron James walks off court during NBA Finals: 'Not a good look'
New York Post
October 5, 2020
LeBron James was the first Los Angeles Lakers player off the court Sunday night as the Miami Heat were putting the finishing touches on their Game 3 victory in the NBA Finals.

James led the Lakers with 25 points, 10 rebounds and eight assists but was clearly frustrated with a late foul call and the 20 Lakers turnovers that ultimately put the team in a hole early and cost them down the stretch.

James was seen leaving the floor with 10 seconds left and off to the side before the buzzer sounded and the game officially ended.

"This is not a good look," ESPN broadcaster Mark Jackson said of James.