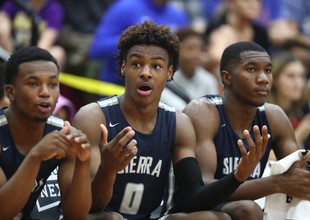 Duke basketball: Three 2023 recruits who should land Blue Devil offers
Ball Durham
October 4, 2020
Thus far, the recruitment of Putnam City North (Okla.) point guard Jeremiah Johnson has primarily been a local one. Oklahoma and Oklahoma State are the only two programs to have extended an offer. That said, by impressing onlookers this summer in AAU play via his elite speed, soft floaters, nifty passes, and advanced outside stroke, the chatter is bound to soon pick up for the four-star.

Apparently, as the attention does escalate, Johnson knows who all he's hoping to talk to the most. In August, the 6-foot-2, 160-pound true floor general told Travis Branham of 247Sports that six schools are on his wishlist of suitors, including four bluebloods:

"I'd like to hear from Kansas, Duke, Kentucky, North Carolina, Purdue, and Vanderbilt."