Klayman: CNN The "Communist News Network" Again Demonstrates Its Allegiances: It Is Now Furthering Propaganda for Beijing!
Go to www.FreedomWatchUSA.org to Join and Support Our Leftist Media Strike Force! Share and Donate 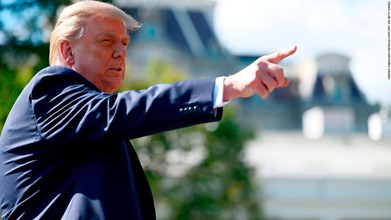 Analysis: Trump has repeatedly blamed China for a virus that now threatens his health. This will make Beijing nervous
By Analysis by James Griffiths
CNN
October 3, 2020
Hong Kong (CNN)In his first presidential debate against Joe Biden, Donald Trump made clear who he blames for the coronavirus pandemic.

"It's China's fault, it should never have happened," the President said, before referring to the virus as the "China plague."

For months now, he has consistently played up initial failures by Beijing in controlling the pandemic to blame China for the global repercussions -- particularly the catastrophic effects the virus has had in the United States, where it has killed more than 200,000 people and infected upwards of 7.3 million, including the President himself.