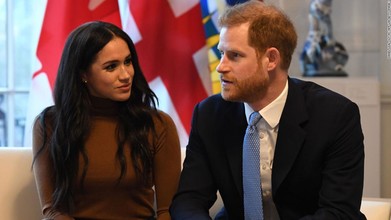 Prince Harry say he's had an 'awakening' on racism
By Rob Picheta
CNN
October 3, 2020
London (CNN)Prince Harry has described his "awakening" to the existence of systemic racism, saying "the world that we know has been created by White people for White people."

Harry said he has only recently recognized the full extent of racism in everyday life, telling the UK's Evening Standard newspaper: "I've had an awakening as such of my own, because I wasn't aware of so many of the issues and so many of the problems within the UK, but also globally as well. I thought I did but I didn't."

Meghan, Duchess of Sussex, on voting in 2020: If you aren't voting, 'then you're complicit'