Trump Attacks Fox News During Hannity Interview: "Fox Is a Much Different Place Than It Used to Be"
Go to www.FreedomWatchUSA.org to Join and Support Our Leftist Media Strike Force! Share and Donate 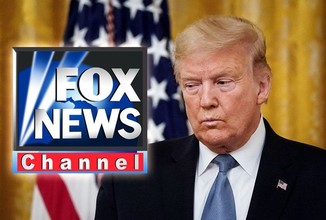 Yahoo News
October 3, 2020
President Donald Trump attacked Fox News while being interviewed Thursday on Fox News, telling primetime host Sean Hannity that the network was in a "much different place" as he disparaged two of its leading newsmen — Chris Wallace and John Roberts.

Trump dialed in to Hannity, with whom he reportedly frequently partakes in pillow talk, for a lengthy call in the hours after reports broke that top White House aide Hope Hicks had tested positive for the coronavirus.