Klayman: Trump's COVID Illness Is Being Politicized as Well by Leftist Chris Wallace of Fox News!
Go to www.FreedomWatchUSA.org to Join and Support Our Leftist Media Strike Force! Share and Donate 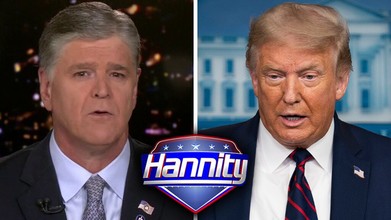 Sean Hannity on Trump's positive coronavirus test: 'Sad' but 'predictable' that it will be politicized
By Caleb Parke
Fox News
October 2, 2020
Reacting to news President Trump and first lady Melania Trump tested positive for the coronavirus, Sean Hannity offered his prayers to the first family.

"I know from my sources in the White House, Hope was actually very vigilant about wearing a mask, took it very seriously. It's the invisible enemy," Hannity called in early Friday to weigh in on the breaking news coverage on Fox News Channel.

"It's unfortunate obviously for him, his family, and everybody that works for the White House," he said.