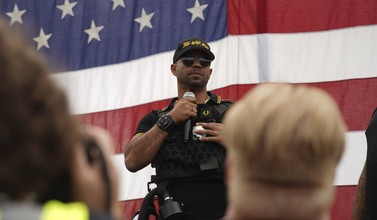 By Valerie Richardson
The Washington Times
October 2, 2020
Enrique Tarrio insists that the Proud Boys aren't White supremacists, and he would be in a position to know. For one, he's the international chairman. For another, he's Black.

Mr. Tarrio headed the rising tide of those defending the Proud Boys against accusations of racism after President Trump came under fire for refusing to denounce the right-wing activist group at Tuesday's debate.