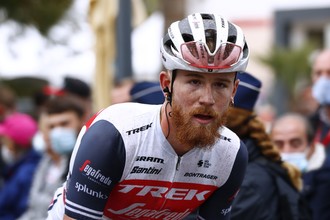 Simmons, a 19-year-old American, was replying to Dutch cycling journalist Jose Been. Been initially tweeted statements that were critical of Trump.

"My dear American friends, I hope this horrible presidency ends for you. And for us as (former?) allies too," Been wrote, via the Associated Press. "If you follow me and support Trump, you can go. There is zero excuse to follow or vote for the vile, horrible man."