Vote-Buying? Bloomberg Sued for Diluting Voter Value in Florida
Filing cites strategy of paying off felons' fees and fines so they can vote again 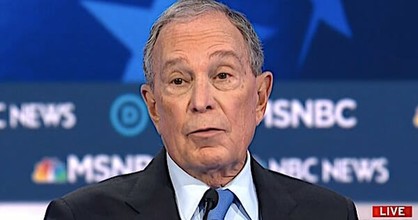 By WND Staff
WND
September 29, 2020
Former New York City Mayor Michael Bloomberg on Tuesday was sued in court in Florida for allegedly diluting the value of citizens' votes by coordinating a campaign to raise money, pay off felons' court fees, fines and costs, and give them back their vote.

The scheme already has raised questions about vote-buying.

The new case was filed by Larry Klayman, the founder of Judicial Watch and Freedom Watch, who explained the case accuses Bloomberg and others of a scheme "to bribe convicted felons to vote for Joe Biden and Kamala Harris."

"The dilution of my vote and the vote of Florida citizens by illegal means must not be permitted," Klayman said. "Michael Bloomberg and his co-conspirators must not be allowed to influence an election for any presidential or vice-presidential candidate. I am therefore asking the circuit court in Tallahassee to issue a declaratory judgment and preliminary injunction barring this illicit plan from going forward.