Klayman: Proof Positive That Fox News Is No Longer for Trump!
Go to www.FreedomWatchUSA.org to Join and Support Our Leftist Media Strike Force! Share and Donate 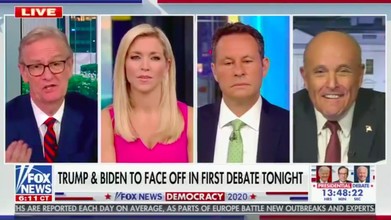 'Fox & Friends' Hosts Look On in Horror as Rudy Giuliani Blurts Out Biden Dementia Conspiracy Theory
By Jamie Ross, Asawin Suebsaeng
The Daily Beast
September 29, 2020
Everyone knows that live television isn't easy. Anything can go wrong—from a faulty connection, a verbal slip-up, or, as was the case on Tuesday morning's Fox & Friends, Rudy Giuliani bellowing insane conspiracy theories at the nation with no obvious way to stop him.

It's always a risk to allow Giuliani to share his wildly unpredictable stream of consciousness live. The man who was named Time magazine's Person of the Year for 2001 has long been reduced to sharing the latest Trumpist conspiracy theories on any cable news channel that has the budget to cover any possible subsequent defamation lawsuits.