Klayman: A Perfect Example How a Politicized Federal Judge Covers for Those on Her Side of the Aisle! Pre-Order It Takes Revolution at Amazon.com 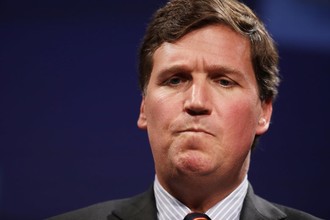 Judge Rules Tucker Carlson Is Not a Credible Source of News
By Elliot Hannon
Slate Magazine
September 25, 2020
A federal judge on Thursday dismissed a defamation case against self-styled Fox News instigator Tucker Carlson. The case was brought by former Playboy model Karen McDougal, who alleged she had a 10-month affair with Donald Trump after meeting him in 2006 and subsequently sold her story a decade later to the National Enquirer. Though the tabloid never ran the story, it was later made public that the publication engaged in "catch and kill" to suppress a number of skeletons in Trump's closet. When the story was revealed, McDougal alleged that Fox News host Tucker Carlson defamed her when discussing it on air in December 2018, telling his viewers that McDougal was soliciting a "ransom" in what "sounds like a classic case of extortion" of the now-president and that she "approached Donald Trump and threatened to ruin his career and humiliate his family if he doesn't give them money." McDougal said that Carlson and the network that airs him damaged her reputation by broadcasting those falsehoods and sought monetary damages.