Former Federal Prosecutor Lays Out Blueprint for Rescuing America
Larry Klayman's 'It Takes A Revolution' explains how to peacefully 'restore rule of law, ethics, and morality' 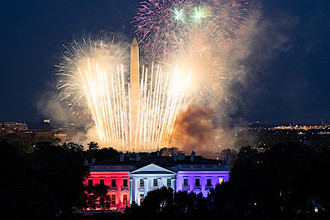 By Larry Klayman
WND
September 24, 2020
Editor's note: Following is an exclusive excerpt from the forthcoming book "It Takes A Revolution" by attorney, former federal prosecutor, founder of both Judicial Watch and Freedom Watch, and longtime WND columnist Larry Klayman.

As I penned in my autobiography, "Whores: Why and How I Came to Fight the Establishment!" which still can be purchased on Amazon.com, BarnesandNoble.com and other booksellers, I founded Judicial Watch, Inc. on July 29, 1994 — twenty-six years ago — because I had come to see government and the legal system as growing increasingly corrupt. As a former federal prosecutor in the Antitrust Division of the U.S. Department of Justice, I found many of my colleagues and the judges before whom I appeared to be highly politicized at best, acting and making decisions not on the merits but on their own personal and professional interests.

This offended me greatly, and my experience before a federal judge in Los Angeles, the less-than-Honorable William D. Keller, in the early 1990s, was the final straw that broke this camel's back. I thus conceived and founded Judicial Watch.