Klayman: Time for Duke Coach K to Be Let Go by My Alma Mater: He Is Destroying the Academic Integrity of My Once Great University! 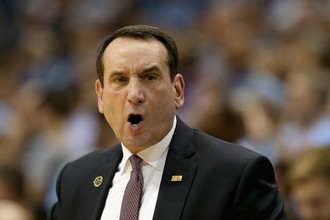 According to Michael McKay of Tar Heel Blog, Duke basketball's Mike Krzyzewski fell short of the glory of his nemesis last week by pulling out of the field that was originally set to comprise the annual Battle 4 Atlantis (which, by the way, has decided to skip 2020 and isn't affiliated with the folks pushing to host the squads in South Dakota).

Krzyzewski is instead planning his own multi-team event for Dec. 4-5 in Cameron Indoor Stadium as a way to celebrate social-justice activism. And in case the 41st-year Duke basketball head coach needs approval from McKay, he should know that the UNC writer does in fact view the social-justice component as "good and commendable." Good to know.