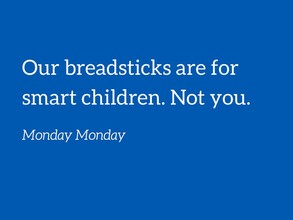 Il Forno cuts ties with Duke: 'We only serve top 10'
The Chronicle
September 22, 2020
Our breadsticks are for smart children. Not you."

The writing is on the wall. Il Forno will soon part ways with Duke. Too good for us, It will lift off and ascend far, far away, like E.T. at the end of the film E.T. (spoilers for the 1982 Stephen Spielberg film E.T.). And maybe we deserve it. After all, the number of chairs and tables in West Union has reduced significantly since last year, likely a byproduct of budget cuts due to our new ranking. But what is Duke without Il Forno? I know that's the most pressing question on everyone's mind right now. It's certainly keeping Duke's president up at night.

Vincent Price is coming apart at the seams. He's been spiraling ever since the publication of my exposé, and this news could be the thing to finally send him over the edge. He bursts into my private study with blind, frenetic terror in his eyes. His clothes are tattered, his hair's a mess and he appears not to have shaved in days. He grabs me by the shoulders and begins violently shaking me.