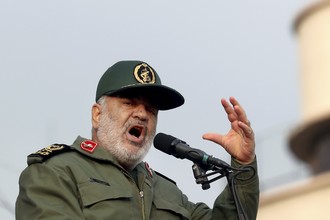 Iran vows 'hit' on all involved in US killing of top general
AP NEWS
September 20, 2020
TEHRAN, Iran (AP) — The chief of Iran's paramilitary Revolutionary Guard threatened Saturday to go after everyone who had a role in a top general's January killing during a U.S. drone strike in Iraq.

The guard's website quoted Gen. Hossein Salami as saying, "Mr. Trump! Our revenge for martyrdom of our great general is obvious, serious and real."

U.S. President Donald Trump warned this week that Washington would harshly respond to any Iranian attempts to take revenge for the death of Gen. Qassem Soleimani, tweeting that "if they hit us in any way, any form, written instructions already done we're going to hit them 1000 times harder."