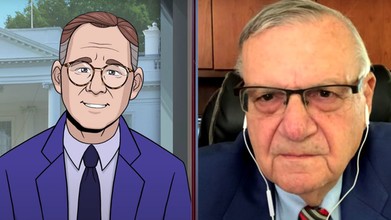 Cartoon Journalist Asks Joe Arpaio If People Will S**t On His Grave
By David Moye
HuffPost
September 19, 2020
Joe Arpaio may have just had the crappiest interview in his career, thanks to some animated "journalists."

Anyone expecting the animated anchors to throw softball questions at Arpaio were in for a shock.

A third of the segment detailed a long list of what the show called Arpaio's "atrocities," and the first question didn't take place until nearly three minutes into the nearly 10-minute segment.