Klayman: Once An "Honest Liberal" Tapper Has Rabidly Prostituted Himself for CNN Head Jeff Zucker!
Go to www.FreedomWatchUSA.org to Join and Support Our Leftist Media Strike Force! Share and Donate 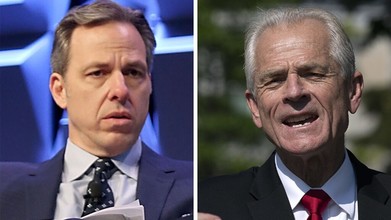 Peter Navarro abruptly cut from CNN interview after telling Jake Tapper network 'is not honest with the American people'
By Nick Givas
Fox News
September 14, 2020
White House adviser Peter Navarro was seemingly cut off by CNN host Jake Tapper during an episode of "State of the Union" on Sunday after the two got into a heated debate about the Trump administration's handling of the coronavirus outbreak.

The interview lasted for several minutes with Tapper giving Navarro the floor to speak at the beginning of the sitdown. Things escalated quickly, however, and the exchange was abruptly shut down after the conversation devolved into a political fight.

"I'm not giving you ten minutes to do this," Tapper said at one point as Navarro walked him through a decision timeline. The former ABC White House correspondent then began continually attacking President Trump and periodically interrupted Navarro to refute his points.