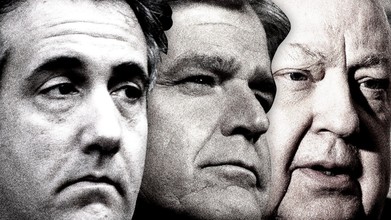 By Lloyd Grove, Maxwell Tani
The Daily Beast
September 8, 2020
President Donald Trump's most influential supporters in the media—Fox News star Sean Hannity, his boss Roger Ailes, and National Enquirer executive David Pecker—were so desperate for Trump's approval that they frequently humiliated themselves to win it, according to the just-released memoir by the president's disgruntled former personal lawyer and fixer, Michael Cohen.

In Disloyal: A Memoir: The True Story of the Former Personal Attorney to President Donald J. Trump, Cohen—who was disbarred last year and is currently serving a three-year sentence under house arrest in Manhattan after pleading guilty to felony counts of tax evasion, lying to Congress (which he admitted having done in the service of "protecting" Trump), and violating campaign-finance laws—provides numerous examples of the former reality star's ability to intimidate and manipulate his ostensibly powerful minions in the media.