Klayman: The Left Is Planning Massive Insurrection and More Violence If Trump Wins!
Go to www.FreedomWatchUSA.org and Support Our Citizens Grand Juries and Join Our Justice League! 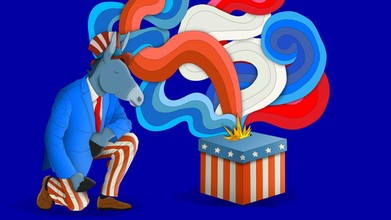 The Left Secretly Preps for MAGA Violence After Election Day
By Sam Stein
The Daily Beast
September 8, 2020
Last week, a coalition of leading progressive groups gathered on Zoom to begin organizing for what they envision as the post-Election Day political apocalypse scenario.

Put together by the Fight Back Table—an initiative launched after the 2016 election to get a constellation of lefty organizations to work more closely together—the meeting dealt with the operational demands expected if the November election ends without a clear outcome or with a Joe Biden win that Donald Trump refuses to recognize.

Sources familiar with the discussions described them as serious with a modestly panicked undertone. A smaller FBT session last fall had talked about post-election planning, but those discussions were tabled because of the COVID-19 pandemic. This was the first time they were bringing the matter to the 50-plus organizations that make up the coalition. To formalize the effort, they gave it a name: the "Democracy Defense Nerve Center."