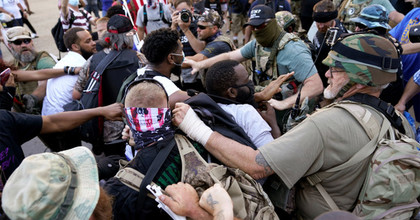 A crowd of self-identified "patriots" carrying long guns — some waving American flags, others waving Trump flags — marched from a parking lot to the downtown area, where another group was calling for action in the Breonna Taylor case.

Taylor, a 26-year-old emergency medical technician, was shot dead when police burst into her home in the middle of the night on March 13.