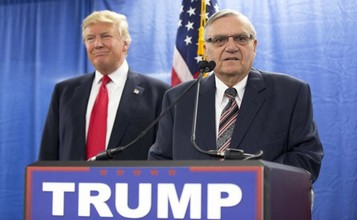 By David Isaac
World Israel News
September 3, 2020
Former Arizona Sheriff Joe Arpaio announced the formation of a new watchdog group, "America's Sheriff," on Wednesday. It has in its sights, among other groups, "radicals of the Jewish left."

The group's co-founder is Larry Klayman, an attorney. Its mission, according to a press release, is to "promote, protect and fight for the interests and legal rights of the nation's law enforcement, including but not limited to local police."

The statement announcing the group's formation said that law enforcement has come under attack, "with radical leftists looting, burning stealing, maiming and even assaulting and killing law enforcement officers, as well as innocent citizens."