Klayman: Black Lives Matter and Its Radical and Lawless Leaders Are Proving to Be the President's BFF! Trump Will Now Win in a Landslide! 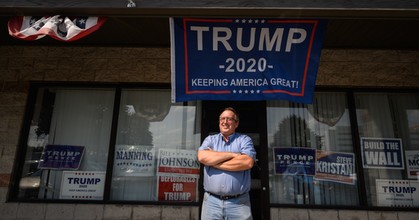 On his lawn are a variety of signs that tell the story of Spickler — at least, the political story. There is a Trump-Pence 2020 sign, a Trump flag, a Trump Country sign, and an Ohio for Trump banner. There is also a sign thanking healthcare workers for their service and, of course, a "Beware of Dog" sign for good measure. Spickler says children come by — he assumes they are children by the videos he has of them — and take his signs down constantly. He puts them right back up "just to mess with them."

Spickler was a lifetime Democrat. He voted for Barack Obama, then switched to Donald Trump in 2016. He cannot wait to show up to vote for him in November and is quick to note the divide in this country. He hopes whoever wins will try to repair it.