Klayman: The "Communist News Network" CNN Hates Those Who Are True Christians!
Go to www.FreedomWatchUSA.org to Join and Support Our Leftist Media Strike Force! Share and Donate 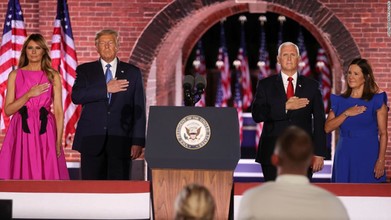 Pence reinvents Trump's presidency on a disorienting night of crises
By Analysis by Stephen Collinson and Maeve Reston
CNN
August 27, 2020
(CNN)Only voters can decide the political fate of Donald Trump. But the evidence of a dark, dispiriting election year suggests unequivocally that the President has failed to find answers equal to the magnitude and complexity of America's two great crises -- over health and race.

So at the shape-shifting Republican National Convention on Wednesday, Trump's most loyal subordinate Vice President Mike Pence had little option but to do what he does best. He twisted the facts, spun a more pleasing alternative national reality and showered his boss with praise.

Even by the standards of 2020, it was a disorienting night. Adding to the awfulness of another police shooting of a Black man and the shooting of two protesters (by an apparent Trump supporter) and the pandemic about to claim its 180,000th American victim, a monstrous hurricane tore towards the Gulf Coast.