Klayman: Excuse the French but Fox News' Chris Wallace Is Just a Leftist Asshole!
Go to www.FreedomWatchUSA.org to Join and Support Our Leftist Media Strike Force! Share and Donate 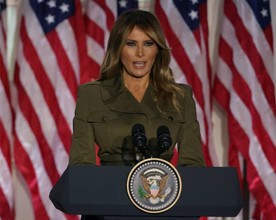 Chris Wallace: Barrier between GOP convention, White House 'completely blown away'
By Joe Concha
TheHill
August 26, 2020
Chris Wallace said "the barrier was completely blown away ... for good or for ill" regarding Republican National Convention speeches being broadcast from the White House, with the "Fox News Sunday" host noting that Secretary of State Mike Pompeo's remarks at the event violated standing State Department policy.

"What stands out to me is that about two or three weeks ago, Donald Trump suggested that he might make his acceptance speech at the White House," Wallace said during Fox News coverage of the convention Tuesday evening. "And there was an uproar in Washington. Republican Senate leaders said, 'That can't happen. We can't have that.' That barrier was completely blown away tonight, for good or for ill."

The second night of the GOP convention featured a speech by first lady Melania Trump from the Rose Garden and Pompeo's pre-recorded remarks from Jerusalem.