In Your Face: BLM Activists Force Diners to Raise Fists in Solidarity
Patrons surrounded with screams of 'White silence is violence!' 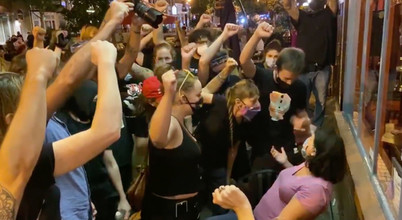 By WND Staff
WND
August 25, 2020
A group of Black Lives Matter activists were caught on video in three separate instances harassing diners at Washington, D.C., restaurants on Monday who refused their demand to raise a fist in solidarity.

Later, they chant, "No justice, no peace!"

In the other video, a couple is berated because they refuse to raise a fist as others have done around them.