Klayman: Perhaps the President Should Also Think About "Pardoning" Barr for His Refusing to Indict Comey, McCabe, the Bidens, Obama and the Rest of the AG's Fellow Establishment Swamp Elites!
Go to www.FreedomWatchUSA.org and Support Our Citizens Grand Juries and Join Our Justice League! 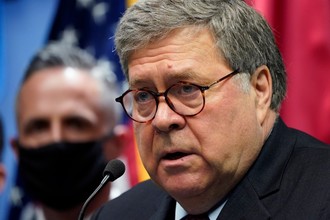 Barr 'vehemently opposed' to pardoning Snowden
By Associated Press
POLITICO
August 21, 2020
WASHINGTON — Attorney General William Barr said he would be "vehemently opposed" to any attempt to pardon former National Security Agency contractor Edward Snowden, after the president suggested he might consider it.

The attorney general's comments in an interview with The Associated Press come days after President Donald Trump said he would "look at" whether to pardon Snowden, who was charged under the Espionage Act in 2013 with disclosing details of highly classified government surveillance programs.