Klayman: More Lies From Sanders and His Communist News Network CNN: Read the Constitution Stupid - This Has Nothing to Do With Race!
Go to www.FreedomWatchUSA.org to Join and Support Our Leftist Media Strike Force! Share and Donate 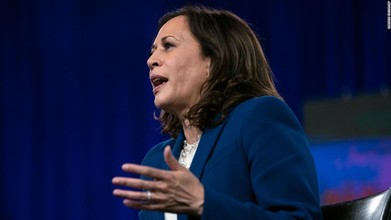 Harris responds to Trump's birther attacks: 'They're going to engage in lies'
By Jasmine Wright
CNN
August 16, 2020
(CNN)Presumptive Democratic vice presidential nominee Kamala Harris said President Donald Trump and his campaign will "engage in lies" and "deception" after he floated a new conspiracy last week about her eligibility to serve as vice president and president.

"They're going to engage in an attempt to distract from the real issues that are impacting the American people. And I expect that they will engage in dirty tactics. And this is going to be a knockdown, drag-out. And we're ready," Harris told media outlet TheGrio in an interview released Sunday, when asked how Trump promoting birther conspiracies signals the tactics his campaign will use.

It's her second interview since former Vice President Joe Biden selected her as his running mate. If elected, Harris would be the first Black and South Asian American vice president.