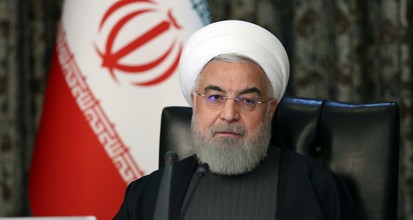 Iran condemns UAE deal with Israel, saying it's a 'huge mistake'
By Caitlin McFall
Fox News
August 16, 2020
Iran's President Hassan Rouhani condemned this week's agreement between the United Arab Emirates (UAE) and Israel, saying in a heated speech Saturday that the UAE made a "huge mistake."

Rouhani called the new diplomatic ties between the UAE and Israel a "betrayal of the will of the Palestinian people and the will of Muslims."

In a historic move, the UAE became the third country in the Middle East to officially establish diplomatic ties with Israel, in an alleged attempt to stop Israel from annexing the West Bank — a policy Israeli Prime Minister Benjamin Netanyahu has long pushed for. US TO ACT 'IN THE COMING DAYS' ON IRAN ARMS EMBARGO AFTER UN SECURITY COUNCIL REJECTS EXTENSION