Klayman: Koepka Is Low Class and God Taught Him a Lesson! Golf Is One of the Few Sports With Any Class Left! Certainly the NFL, NBA and MLB Don't Have Any! Maybe Koepka Should Change Sports! 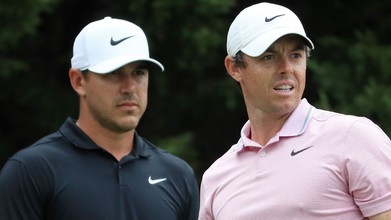 Rory 'taken aback' by Koepka's dig at D. Johnson
ESPN.com
August 10, 2020
Rory McIlroy took issue with Brooks Koepka noting that Dustin Johnson had "only" won one major win when assessing his own chances at winning a third straight Wanamaker Trophy.

Asked about it Sunday following a final-round 68, McIlroy said he was not impressed.

"It's a very different mentality to bring to golf that I don't think a lot of golfers have,'' said McIlroy, who has won four major championships but none since 2014. "I was watching the golf last night and heard the interview and was just sort of taken aback a little bit by sort of what he said and whether he was trying to play mind games or not. Editor's Picks