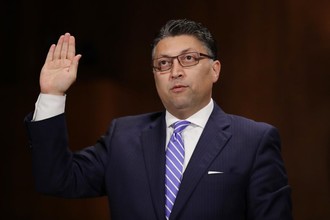 The Utter Failure of the Trump Administration's Antitrust Chief
By Chris Sagers
Slate Magazine
August 10, 2020
However little hope the election of Donald Trump left, for some antitrust watchers it hid the slimmest of silver linings: Maybe, just maybe, some thought, Trump's criticisms of corporate power on the campaign trail (Amazon, Time Warner) were more than just attacks on his political enemies (Jeff Bezos, CNN) and would translate into meaningful enforcement of antitrust and other laws. Some held similar hope for the Trump Justice Department's new antitrust chief, Makan Delrahim, who gave several barn-burning speeches early on that promised tougher enforcement. Immediately on taking office in 2017, Delrahim brought an extraordinary challenge to the merger of AT&T and Time Warner, the government's first vertical merger case in 40 years. Antitrust believers cheered, cautiously hoping that Trump's promises to use the law against concentrated power were worth more than empty air.

In light of several remarkable recent events, and rumors that Delrahim may soon leave the Department of Justice, it is worth asking how well one of Trump's principal antitrust enforcers—and by extension Trump himself—delivered on antitrust. There is a growing consensus, after all, that America has developed a serious "monopoly problem," one that journalists, civil society, and Congress are scrutinizing more and more. But history will not be kind to Delrahim or what might have been his contributions to this awakening. Probably no U.S. antitrust chief has ever failed quite so thoroughly and variously.