Klayman: Predictable Since If You Are Muslim You Can Play the Race Card and Be Above the Law!
Go to www.FreedomWatchUSA.org and Support Our Citizens Grand Juries and Join Our Justice League! 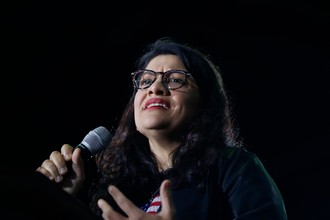 Ethics Committee finds Rashida Tlaib violations were 'bad timing' not 'ill intent'
By Max Cohen
POLITICO
August 8, 2020
The House Ethics Committee found Rep. Rashida Tlaib (D-Mich.) violated campaign finance rules by receiving a campaign salary when she was no longer a congressional candidate — but that she did not have "ill intent" in her actions.

The committee concluded that receiving a portion of her salary from campaign funds following the 2018 general election ran afoul of the Federal Election Campaign Act, according to a report released Friday.

But the committee noted that Tlaib's error was "one of bad timing and not ill intent."