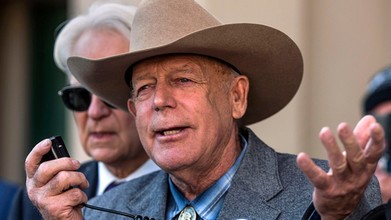 Fox News
August 8, 2020
A U.S. appeals court refused Thursday to resurrect the criminal case against states' rights figure Cliven Bundy, family members and others stemming from a 2014 armed standoff with federal agents trying to round up Bundy cattle near the family ranch in Nevada.

The 9th U.S. Circuit Court of Appeal in San Francisco denied prosecutors' efforts to overturn U.S. District Judge Gloria Navarro's decision to stop a months-long trial in January 2018 for "flagrant" prosecutorial misconduct and her dismissal of the criminal indictment so it could not be re-filed.

"The judgment is affirmed," Judge Jay Bybee wrote for the three-judge panel that heard oral arguments May 29. The judges found Navarro properly identified violations of "recognized statutory or constitutional" rights, and she had the authority to punish the government "to deter future illegal conduct."