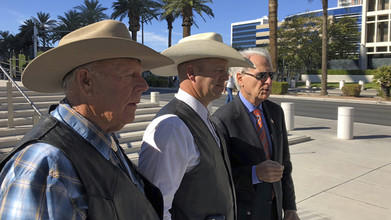 By Kirk Siegler
NPR.org
August 7, 2020
A federal appeals court in San Francisco has denied the Justice Department's motion for a retrial in the case against Nevada rancher Cliven Bundy, who led an armed standoff against federal agents over cattle grazing near his ranch in 2014.

The decision Thursday comes more than two years after Bundy, two of his sons and Montana militiaman Ryan Payne walked out of the federal courthouse in Las Vegas as free men. The government's case collapsed after a mistrial in which prosecutors were admonished for failing to turn over evidence and for not disclosing the existence of surveillance camera footage and federal snipers stationed by Bundy's house near the town of Bunkerville.