Klayman: Van Gundy Is a Washed Up Fool: Boycott Him and the Anti-American NBA! 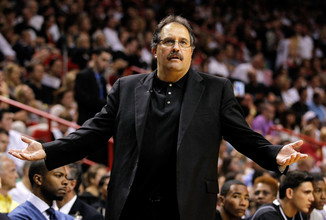 Stan Van Gundy Has Message For Player Who Stood For The Anthem
The Spun
August 3, 2020
Former NBA head coach Stan Van Gundy had a message for the Miami Heat player who stood for the national anthem on Saturday.

Miami Heat big man Meyers Leonard was the lone player who stood for the national anthem before Saturday's game against the Denver Nuggets.

"Today, I listened to my heart. I felt an overwhelming amount of emotion as I stood there during the National Anthem. My brother, and many close friends have sworn to protect this country at all costs, and that means something to me, as does the flag and our nation," he wrote.