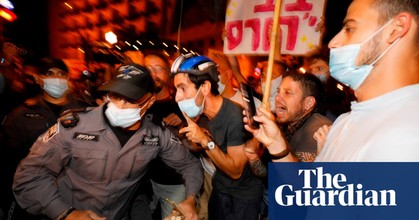 Thousands demonstrate against Netanyahu as Israel protests gain strength
By Oliver Holmes
the Guardian
August 2, 2020
Thousands of demonstrators took to the streets outside Benjamin Netanyahu's house over the weekend in what appeared to be the largest protest to date calling for the embattled Israeli prime minister to resign.

Rallies on Saturday night and into the early hours of Sunday morning were held in Jerusalem, home to the official residence of the 70-year-old leader, as well as his beach house in central Israel, near Tel Aviv, and at dozens of road intersections across the country.

Throughout the summer, Israelis have packed roads and squares calling for Netanyahu to resign, protesting against his government's handling of the country's coronavirus crisis and charges of alleged corruption.