Klayman: Another Leftist Hack at Fox News: There Are More and More Each Day!
Go to www.FreedomWatchUSA.org to Join and Support Our Leftist Media Strike Force! Share and Donate 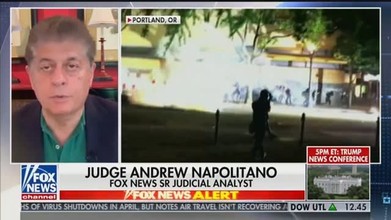 During his House testimony on Tuesday, Attorney General William Barr justified the Trump administration's use of federal agents to crack down on anti-police brutality protesters, describing the Portland demonstrations as "an assault" on the U.S. government. The administration, meanwhile, has dispatched even more agents to Portland, even though local activists and officials note that the feds' presence has inspired more violence.

Appearing on Your World with Neil Cavuto, Napolitano agreed with Barr's assertion that the federal government has the right and even the obligation to protect federal property in Portland. At the same time, the Fox analyst said that many agents have been seen "nowhere near the courthouse disrupting freedom of speech."