Klayman: Not Good at All: President Backs Down to Portland Leftist Mayor!
Go to www.FreedomWatchUSA.org and Support Our Citizens Grand Juries and Join Our Justice League! 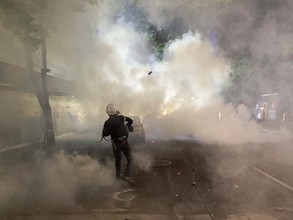 Trump orders federal officers to leave Portland after weeks of outrage
The Independent
July 30, 2020
Donald Trump's administration has ordered federal agents who have been aggressively policing Black Lives Matter protests in Portland for weeks to leave the city.

The Department of Homeland Security (DHS) has announced that Oregon Governor Kate Brown has "agreed to a joint plan to end the violent activity in Portland directed at federal properties and law enforcement officers."

Governor Brown said that officers from US Customs and Border Protection and Immigration and Customs Enforcement "have acted as an occupying force and brought violence."