Trump Lashes Out at Reagan Foundation After Fundraising Request 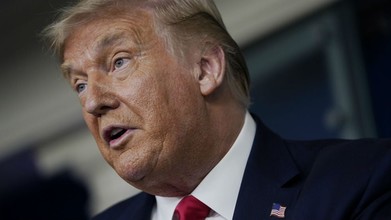 By Justine Coleman
TheHill
July 27, 2020
President Trump lashed out at the Ronald Reagan Presidential Foundation and Institute on Sunday following a report that it had requested the Trump campaign stop using former President Reagan's name and image in fundraising.

Trump made the remarks in a tweet that also shared a post pointing out that the Reagan Foundation's chairman, Frederick Ryan Jr., is the publisher and CEO of The Washington Post. In his tweet, Trump also hit Fox News over recent polls that have showed him trailing Joe Biden, his Democratic presidential rival.

"So the Washington Post is running the Reagan Foundation, and RINO Paul Ryan is on the Board of Fox, which has been terrible. We will win anyway, even with the phony @FoxNews suppression polls (which have been seriously wrong for 5 years)!" Trump posted.