Klayman: The Only Misinformation Is the Socialist Crap Spewed by CNN: The Communist News Network!
Go to www.FreedomWatchUSA.org to Join and Support Our Leftist Media Strike Force! Share and Donate 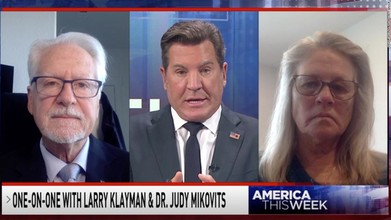 Local TV stations across the country set to air discredited 'Plandemic' researcher's conspiracy theory about Fauci
By Oliver Darcy, CNN Business
CNN
July 25, 2020
New York (CNN Business)Local television stations owned by the Sinclair Broadcast Group are set to air a conspiracy theory over the weekend that suggests Dr. Anthony Fauci, the nation's top expert on infectious diseases, was responsible for the creation of the coronavirus.

The baseless conspiracy theory is set to air on stations across the country in a segment during the program "America This Week" hosted by Eric Bolling. The show, which is posted online before it is broadcast over the weekend, is distributed to Sinclair Broadcast Group's network of local television stations, one of the largest in the country. A survey by Pew Research Group earlier this year showed that local news was a vital source of information on the coronavirus for many Americans, and more trusted than the media overall.