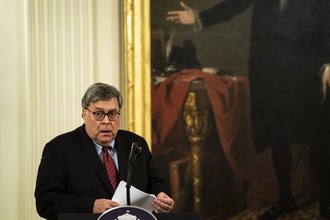 Analysis | Barr claimed 200 FBI arrests in 2 weeks in Kansas City. He was only off by 199.
By Aaron Blake
Washington Post
July 24, 2020
President Trump is focused intently on making his 2020 reelection campaign about violence in Democratic-led cities. In that effort, he's gotten official buy-in from two key Cabinet agencies: the Department of Homeland Security and the Justice Department. The DHS is spearheading a questionable and legally suspect crackdown effort in places such as Portland. And the Justice Department's head, Attorney General William P. Barr, has been out front on bolstering Trump's claims about the allegedly nefarious nature of the demonstrators.

"We've named the operation, as we've said, 'Operation Legend,' and we started rolling it out a couple of weeks ago in Kansas City," Barr said. "And just to give you an idea of what's possible: The FBI went in very strong into Kansas City, and within two weeks, we've had 200 arrests."

Except that's not even close to true. As the Kansas City Star reported, we actually just saw our first federal charge since the operation launched — far from 200 arrests. The Justice Department clarified that Barr meant that there have been 200 arrests since December and connected it not to the new Operation Legend but to a precursor called "Operation Relentless Pursuit."