Klayman: Portland Mayor Should Be Arrested and Charged for Aiding and Abetting Violence and Crime by Leftists!
Go to www.FreedomWatchUSA.org and Support Our Citizens Grand Juries and Join Our Justice League! 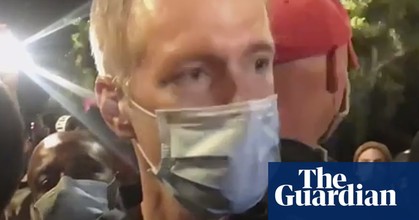 Ted Wheeler, the Democratic mayor of the city in Oregon, said it was the first time he had been teargassed and appeared slightly dazed as he put on a pair of goggles someone had handed to him, coughed and drank water. He did not move from his position.

Around Wheeler the protest raged late on Wednesday, with protesters lighting a large fire in the space between the fence and the courthouse. Federal agents deployed teargas and stun grenades into the crowd. It was not immediately clear if the agents knew Wheeler was in the crowd when they used the teargas.