Klayman: It's Chris Wallace Who Needs a Cognitive Test; Worst Leftist Hack on Fox News!
Go to www.FreedomWatchUSA.org to Join and Support Our Leftist Media Strike Force! Share and Donate 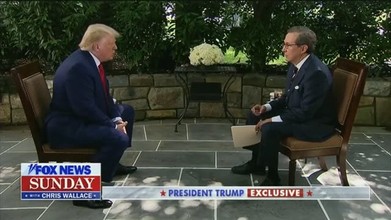 Chris Wallace to Trump: Cognitive Exam 'Not the Hardest Test', Involves Identifying an Elephant
By Justin Baragona
The Daily Beast
July 19, 2020
Fox News anchor Chris Wallace found himself entangled in a weird and bizarre debate with President Donald Trump over the president's cognitive tests boasts, pointing out how easy the test is and that one of the questions merely asks the taker to identify a picture of an elephant.

"They said, 'that's an unbelievable thing. Rarely does anybody do what you just did,' Trump told Hannity on July 9. "But [Biden] should take that same test."