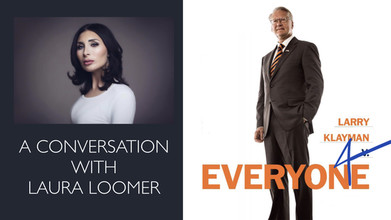 
Watch on Freedom Watch YouTube Channel
(Palm Beach, Florida, July 19, 2020). This Sunday, July 19, 2020, the fearless and most banned conservative by social media, Laura Loomer, the woman who exposed the immigration fraud and other crimes of Rep. Ilhan Omar and who sued Omar's anti-Semitic "Muslim twin," Rep. Rashida Tlaib over assault at a campaign event with Omar, who jumped the fence at House Speaker Nancy Pelosi's mansion and set up camp with illegal immigrants to make a point, and who has taken on California Governor Gavin Newsom and many other leftists including social media for discrimination, will appear on "Larry Klayman 4 Everyone," a show produced by Judah Friedman and Larry Klayman and co-hosted by them as well.

Klayman, who is not only Loomer's lawyer, having sued social media giants and other left wing media on her behalf, among other legal actions, is also the founder of both Judicial Watch and now Freedom Watch.

Tune in and watch Klayman and his co-producer and co-host Friedman interview Ms. Loomer, a woman who has risked her life to fight for freedom and liberty. You will be fascinated and enthralled to hear Laura Loomer's life story and why she is running for Congress in Florida.